Actress Edie Falco Is Stepping Into The World Of Virtual Reality To Voice A Mother Orca Whale Mourning The Loss Of Her Baby As Part Of A New Campaign Against Controversial Theme Park Seaworld. 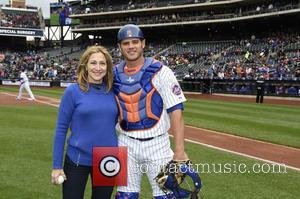 The Sopranos star, a longtime supporter of animal rights group People for the Ethical Treatment of Animals (PETA), has teamed up with organisation officials for a new empathy project called I, Orca, which uses Google's virtual reality goggles to give participants an idea of what it feels like to be a killer whale and swim with its orca family.

In the video, the user will meet an orca mother, voiced by Falco, who still mourns her baby whale, decades after her son was taken into captivity and sent to SeaWorld.

She says, "One minute my little boy was with me - the next he was pulled up out of the water. There was nothing I could do to save him. They have stolen his life, torn us apart, and put him in a concrete box filled with chemically treated water... He's been robbed of his family's love and all the joys of the ocean, where he belongs."

The campaign aims to highlight the way killer whales are treated at the popular aquatic tourist attraction, where bosses have been accused of animal cruelty.

PETA activists will take the art project on tour to cities near SeaWorld locations in Orlando, Florida, San Diego, California and San Antonio, Texas in a bid to convince tourists and locals to shun the theme parks in favour of more animal-friendly entertainment.