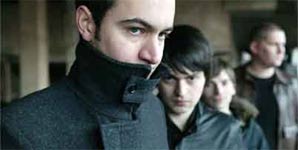 I was quite prepared to dislike Editors. I imagined they'd be shoe-gazing Joy Division wannabees, rehashing every 80s cliché under the sun. I got this impression, I must admit, without ever hearing a note from them. So my prejudice was rightly punished when I listened to the evocative and immensely catchy album 'The Back Room'. It then it took a real thumping when I went to see Editors live. I now understand why their tour sold out pretty much as soon as it was announced. Often the 'next big thing' in British music is not much more than smoke and mirrors and good marketing campaign. Editors, on the other hand, are the real thing. Tonight's set closely echoes the album – Lights is the first song of the night and gets the audience into an immediate frenzy.

Editors' songs are mostly upbeat and made for getting sweaty, but with moments of beauty and peace, most notably from 'Camera' and 'Fall'. Singer Tom Smith seems to have the energy of three men crammed into his small frame – and it's making him burst at the seams with gorgeous, powerful melodies and the voice of a fallen angel. Imagine the skinny son of Henry Rollins or maybe James Dean Bradfield when the Manics first arrived on the scene. It's only when he shyly approaches the mic between songs and asks 'Is everybody alright?' that he pauses to take a breath. Russell Leech on bass looks like an affable gangster. Without once breaking into a smile, a frown, or any other facial expression, he stares down the audience and delivers bass lines from the devil – loud, relentless and passionate. Nottingham boy Chris Urbanowicz treats his home-town crowd to some deliciously retro sounding guitar. There's no doubt, the 80s are influential here, but the originality of the songs, and the honesty and power of the live delivery ensure Editors are bringing something fresh and new to the table. I, for one, will be tucking in with relish.