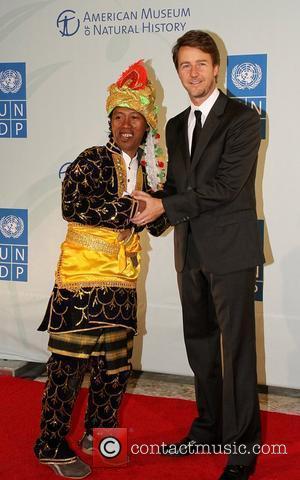 Actor Edward Norton has Radiohead rockers Thom Yorke and Jonny Greenwood to thank for the "spiritual" sound in his new movie STONE - they helped him with ideas for the score.
The Fight Club star and director John Curran were anxious to find the perfect "divine" music to accompany key scenes in the film, and Norton turned to his guitarist pal Greenwood for advice.
The rocker happily handed over dozens of experimental pieces he had been working on with the band's frontman Yorke - and Stone composer John O'Brien listened to the tracks before writing the film's score.
Norton tells Variety, "I'm friends with the guys in Radiohead, and Jonny Greenwood, who did the incredible score for Paul Anderson's There Will Be Blood, met me in London a while back when John (Curran) and I were developing the script.
"So given the spiritual ties in this film, I started talking to him about this idea: 'What would you use to record this divine-like tuning sound?' And he and Thom had been playing a lot of weird ambient stuff at the time and so, amazingly, they just unloaded tons and tons of files to us of these sound experiments that they had been doing.
"We just listened to them in awe until John eventually got John O'Brien to come in and see what he could make of it."