Review of Leaders of the Free World Single by Elbow 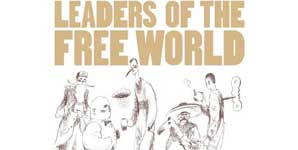 A great man, at least within his own biosphere, one Paul Hewson- Bono to you and me, once said that music could change the world. I guess it was a pretty spurious claim. I mean- was the world gonna go in for all this peace and love through music schmuck. Hell they probably would have bought it too. But Guy Garvey just came along and spoiled it didn't he? The rat. I doubt 'Leaders of the Free World' will ever reach the midst of George Bush, but if it does the detectors at JFK will be set to detect 'cynical Manc' alongside the usual 'guns and stuff'. For its merits this has to be one of music's most laid back political statements, the band's trademark woosy drawl the perfect home to couch a protest, which comes on with a wry smile and a nudged arm rather than an overblown tirade. While the line 'passing the gun from Father to feckless Son' went straight into my personal collage of favourite ever lyrics. And it has a recorded message from Bin Laden if you play it backwards. So I'm told.
John McGee