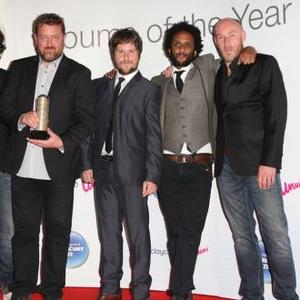 The Grammy award-winning folk band will take to the stage for their only UK festival appearance this year on Friday July 13, with the 'One Day Like This' hitmakers - who have penned the theme to the London 2012 Olympic Games - taking the slot on Saturday, while the Modfather will round off the performances on Sunday July 15.

In addition to the trio of headline acts, the likes of Laura Marling, White Lies, The Horrors, Metronomy and BBC Sound of 2012 winner Michael Kiwanuka have also been confirmed to play at this year's event.

Elsewhere, the multi-arts festival - which takes place at Henham Park in Suffolk, South East England - will feature comedic performances from the likes of Jack Dee and Russell Kane, as well as productions from The National Theatre and poetry from Benjamin Zephaniah.

Melvin Benn, managing director of Festival Republic and founder and creator of Latitude festival, said: ''This year's line-up will once again see Latitude present a bill of sensational artists. Superstar pianist Lang Lang is one of the world's biggest live and recording artists, and we're delighted to welcome him to his first ever outdoor festival.

''Bon Iver, Elbow and Paul Weller are all headliners with outstanding pedigrees, which we're thrilled to announce.

''And with artists and companies of the calibre of Jack Dee, The Infinite Monkey Cage, National Theatre, Globe Education at Shakespeare's Globe and Tim Minchin all appearing, we're confident that 2012 will be the best Latitude yet.''

For a full list of artists appearing and the full list of national and regional ticketing outlets please visit www.latitudefestival.co.uk.