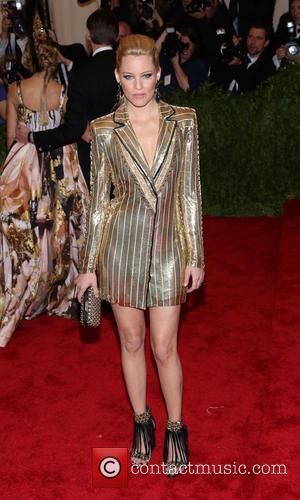 Elizabeth Banks, Kristen Bell and Nia Vardalos are among the stars who have applauded Angelina Jolie for going public with her double mastectomy.

The Salt actress underwent the preventative surgery earlier this year (13) after doctors informed her she had an 87 per cent risk of contracting breast cancer because she carried the "faulty" gene Brca1.

Jolie opened up about her decision in Tuesday's (14May13) edition of the New York Times, and several of her acting peers took to their Twitter.com page to heap praise on the star for speaking publicly about the surgery.

Banks writes, "Much respect & for sharing in classy way", Bell declares, "An admirable op ed (opinion/editorial) by Angelina Jolie", and Vardalos tells her followers, "A moment of quiet respect for Angelina Jolie's candor (sic) and all women's bravery in facing this choice".

British pop star Michelle Heaton, who underwent a double mastectomy last year (12) in a bid to prevent her developing breast cancer, phoned in to U.K. morning show Daybreak to applaud Jolie's courage in going public with her surgery.

She says, "How she managed to keep it quiet is amazing and I'm totally in admiration for that but I'm also over the moon actually that she decided to come out and tell everybody what she's gone through. Over the last six months, with myself and then Sharon Osbourne (who underwent a preventive double mastectomy in 2012) and now Angelina it can only be a positive thing that the Brca gene is being raised in the media. It's allowing women to be educated on the Brca gene."