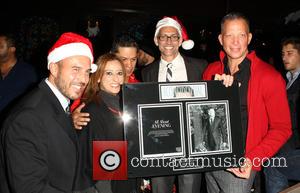 Picture: Victor Tomasino, Todd Barnes, David Cooley and Guests - Shots of celebrities from World AIDS Day as the Elizabeth Taylor AIDS? Foundation along with the...

Canada-born Scaasi passed away on Tuesday (04Aug15), according to Women's Wear Daily.

He was best known for dressing some of the most stylish Hollywood stars throughout the 1960s and '70s, including actresses such as Joan Crawford, Elizabeth Taylor, Lauren Bacall, and Barbra Streisand, who famously donned his sheer black pantsuit when she won the Academy Award for Best Actress in 1969.

Many of his garments have been donated to museums, including the Smithsonian and the Museum of Fine Arts, Boston.