Dakota and Elle Fanning team up with Rodarte?

Dakota and Elle Fanning are reportedly working on a secret collaboration with Rodarte, one of their favourite fashion houses. 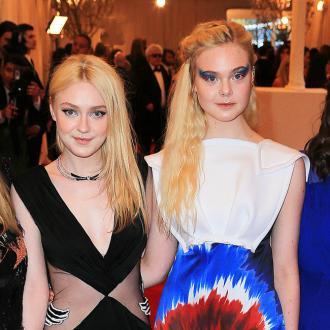 Dakota and Elle Fanning are reportedly teaming up with Rodarte.

The showbiz sisters are said to have been working with the design duo behind the brand, Kate and Laura Mull, on a secret collaboration.

A source told the Mail on Sunday newspaper: ''The girls have been very hands-on.''

It is unknown whether the young actresses are involved in making a whole collection or just one special piece.

Dakota, 19, has been acting since the age of seven and her younger sister Elle, 15, has taken Hollywood by storm in the last few years.

They have already earned their fashion credentials by appeared in ad campaigns for Marc Jacobs and are can usually be found on the front row at Chanel and Rodarte shows.

The girls turned heads at the Met Ball last week in Rodarte, with Dakota sporting an embellished black dress and Elle looking more playful in a multicoloured gown.

The news comes as no surprise since Dakota previously revealed her sibling is fashion-mad and is particularly interested in the craftsmanship of clothes.

''She has a real passion, and it's not at all in a materialistic way. She genuinely appreciates the workmanship and creativity.''