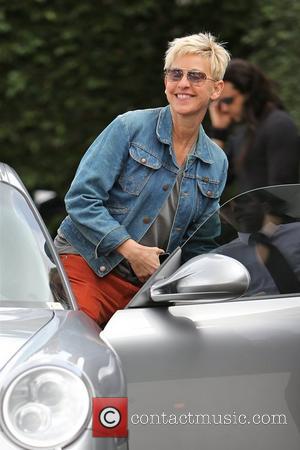 Picture: Ellen DeGeneres is all smiles as she returns to her car after eating lunch with a friend at Cecconi's West Hollywood Los Angeles, California -...

Ellen Degeneres and Ryan Seacrest are friends 'in real life', so when he came to chat to her on her show, Ellen, plenty of anecdotes came spilling out in the conversation.

Ellen told her audience about a joint birthday party between herself and her wife Portia de Rossi in which Jennifer Aniston's fiancée Justin Theroux was persuaded to do some breakdancing, reports People. That's the kind of friends Ellen DeGeneres has. Anyway, never one to be outdone, Seacrest's girlfriend, ballroom dancer, singer and actress, Julianne Hough gave Theroux a dance off.

"[They] decided to have a breakdancing break-off," DeGeneres said. "[Julianne] was wearing a skirt and goes, 'I need pants.' ... She and Justin Theroux had a huge dance-off. It was crazy... She's an amazing dancer." A statement which Seacrest heartily agreed with. Apparently, Hough is "amazing at literally everything."

Plus, as E! reports Ellen also brazenly asked him when he was getting married. He was quite vague about the topic, but implied that he may ask Hough in the near future, saying: "At the perfect time, and she will be the first to know."

In other news, he's currently presenting American Idol and he admitted that there was tension between two of its judges: Mariah Carey and Nicki Minaj. While he added that they're "good now", he also said: "I have no idea what it's going to be like when we go live which is sort of the exciting part of that."