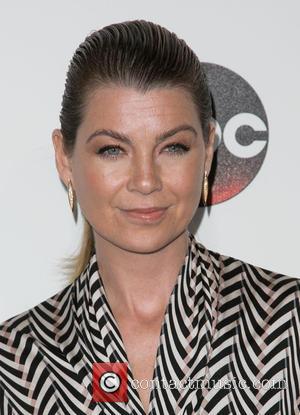 Picture: Ellen Pompeo - TGIT Premiere Event for Grey's Anatomy, Scandal, How To Get Away With Murder at Palihouse in West Hollywood - Los Angeles, California,...

Actress Ellen Pompeo had a scare at her home earlier this week (beg29Sep14) when a coyote jumped over her wall and attempted to eat her dog.

The Grey's Anatomy star's nanny chased the coyote away after she spotted it chasing her boss' pooch across the yard.

Appearing on U.S. late-night show Jimmy Kimmel Live! on Thursday (02Oct14), Pompeo explained, "A coyote jumped my wall at my house... six foot wall around the whole property, middle of the day... There's a good chance that the coyote jumped on top of a car roof and then over (the wall).

"We had a house full of people and he just jumped over the wall and hid in the bushes, so no one really saw the coyote... and then the next you know my nanny looked out and saw the coyote chasing the dog across the yard, and by the time she could get out there the coyote had the dog in its mouth.

"I had run to the store, I wasn't there... so she (nanny) just started screaming... My husband said, 'I thought somebody was, like, getting butchered to death'. The coyote dropped the dog and jumped back over the fence."

Little Lizzie survived the attack and is back at home recovering from six puncture wounds.

Pompeo, who announced the news she had become a mum again via surrogate on Thursday (02Oct14), is grateful the coyote didn't snatch one of her other toy poodles: "Lizzie is the biggest of the three, thank God, because the other two would not have survived these injuries... The other two dogs are literally five pounds each. They're tiny tiny toy poodles.

"Chris, earlier in the day had come home and forgotten to shut his car door... and (one of the dogs) Tino ran in the car and hid in the back seat on the floor of the car. He's so smart."