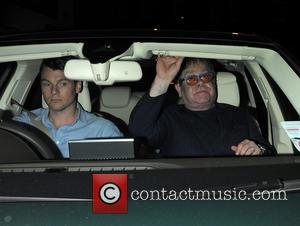 A representative for Sir Elton John has moved to distance the star from one of Britain's most controversial political parties after the group's leader claimed to have enjoyed a private dinner with the music legend.

The Rocket Man hit headlines in Britain this week (beg18Aug14) when Nigel Farage, leader of the right-wing UK Independence Party (Ukip), insisted he had been invited to a bash at the singer's home and had talked to him "about politics and current affairs", adding to Fubar Radio, "I got on very well with Elton John indeed. He really, truly understands."

The remarks sparked rumours about the singer's personal politics, and a representative for Elton John has now spoken out to silence speculation the star has any involvement with Ukip, which is known for its controversial policies relating to immigration and Britain's stance on Europe.

Elton John's spokesman, Gary Farrow, tells The Times newspaper, "(He) is a supporter of no party... (there is to be) no announcement (of support) at all."

Farrow added that Farage had attended a dinner with the star, but as a guest of another invitee.