Sir Elton John is asking David Beckham to teach his son Zachary how to play soccer like a professional. 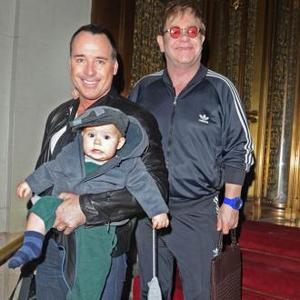 Sir Elton John is asking David Beckham to teach his son Zachary how to play soccer like a professional.

The 65-year-old musician thinks his toddler could be a great sportsman one day with some help from 37-year-old friend David.

Sources told the Daily Star newspaper: ''Elton can teach him everything he wants to know musically, but when it comes to anything athletic, he's clueless.

''So as soon as Zach's old enough, he wants Beckham to help train him.

They added: ''Elton thinks that his son already has what it takes to be a sportsman when he grows up.''

He said: ''He has a Welsh accent when he says Daddy for Christ sake. I don't know why. But he is a gorgeous little sausage.''

Elton was recently described as the perfect replacement for Sir Tom Jones, who is rumoured to have quit 'The Voice' UK along with Jessie J.

Asked who he would like on the panel, The Script's Danny O'Donoghue said: ''Elton John. I've thought about this long and hard. I think Elton John needs to take over Tom's position.