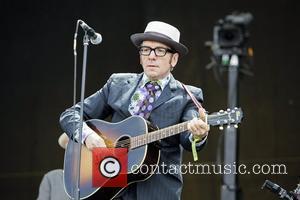 Elvis Costello is going back to the future - he's releasing his next album in an old-fashioned 78rpm format to thwart illegal downloaders.
The veteran British rocker insists he doesn't mind fans stealing music online but is also adamant they are "cheating" themselves if they don't also buy a copy on disc.
And in an attempt to create a non-downloadable record, he is releasing "excerpts" from his forthcoming album, National Ransom, on 78rpm vinyl - one of the earliest formats for recorded music.
He tells Q magazine, "I am of the mindset, pay for everything, steal everything. But you are cheating yourself if you don't get the music in the best format. There will be a vinyl version of National Ransom, and we're pressing some excerpts on 78rpm, just because I want to create a beautiful object. Then people will have to hunt for something to play it on. You can't upload a 78."