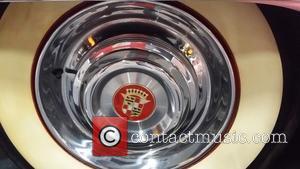 The 14 carat gold piece, emblazoned with a Russian crest, originally belonged to the Love Me Tender singer's father Vernon, who passed it on to his son.

The rock and roll superstar wore the ring at more than 100 performances, but gave it away to a fan named Tommy Milham, who queued for 20 hours to ensure he was first in line for a ticket to see his musical idol perform in Mobile, Alabama in 1976.

Milham managed to meet the star after the concert and he asked Presley to autograph a copy of a news article about his long wait for a ticket, but as neither of them had a pen, the singer offered him his scarf, but Milham demanded the ring instead and the rock legend accepted.

The current owner bought the piece from Milham in 2004, and is now selling it through Omega Auctions of Warrington on Wednesday (23Sep15).

Auctioneer Paul Fairweather tells Britain's Warrington Guardian newspaper, "This is such a unique piece of Elvis' memorabilia with unquestionable provenance. I expect it will achieve a considerable sum."