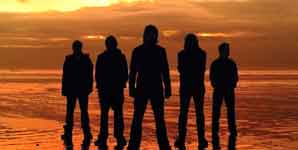 Halifax may not be a regular stop on most tours, but Embrace have chosen to keep the first live airings of their new chart-topping album "This New Day" on the small side. The Yorkshire town also happens to be where they hail from, so anticipation is high amongst the 2000 capacity crowd for a band who formed the best part of 20 years ago.

As on their current release, "No Use Crying" begins proceedings, but far from in spectacular fashion. The translation to stage lacks the polish it holds on record, and it isn't aided by a sound system in a venue perhaps not designed with a rock concert in mind. "Nature's Law" also loses its epic touch, but sandwiched in between the two is "All You Good Good People", a sure-fire way to get any crowd going. Danny McNamara explains that his voice has been playing up, but that the band will strive on and play an extended set for their homecoming, which means a great rendition of "My Weakness Is None Of Your Business" and the first performance on the tour of "Exploding Machines". Of the other new tracks, "Target" retains its brilliance and "The End Is Near" shimmers to the high heavens, thanks to Richard McNamara's guitar skills.

The indie anthem "Come Back To What You Know" remains as popular as ever, with McNamara being out-sung by the entire audience, and the crowd participation on "A Glorious Day" is intense enough to make the hairs on your neck stand on end. Proving they can turn their hand to full-on rock, "New Adam New Eve" and "Save Me" feature bouts of crowd surfing and mass-pogoing, to the point where the floor threatens to give way. Everyone is clearly having a fantastic time, not least the band, who can't erase the grins from their faces for a single moment. It's only right that such an enjoyable night is finished in high spirits, and the "la la la" conclusion of "The Good Will Out" is perfect. Few, if any, of the audience leave disappointed, and for Embrace, it proves there's just no place like home.