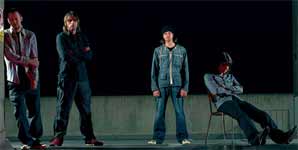 The question that was glossed onto everybody's lips like Bet Lynch lippy, was can the down to earth Yorkshireman pull it off in front of a large crowd in an arena? The early utilization of the steady and favourite 'All You Good, Good People' embodied the crooning spirit and uplifting nature of the band and it rubbed off on the crowd early on.

Despite teething technical difficulties that had the amps cackling at each other, as if to say; "what the f*@k are we doing here?" The Danny McNamara led quintet fought off these Gremlins to produce a vibrant and heartfelt version of 'Someday' from the gripping 'Out Of Nothing' album. This song gave the first impression that they may just pull it off in a strange surroundings for them, as no matter what people say about Embrace, no one can claim that they don't put heart and soul into everything they do.

Not content to rest on their laurels having managed to bag a gig in a venue that Danny himself thought would never be possible for a band like Embrace, it turns out that this has given the band renewed vigour. They proudly paraded a new number; 'No Use Crying' that was as frenetic as Embrace get, serving as one of many examples of tight and faultless guitar stroking from Richard McNamara. The Chris Martin penned 'Gravity', featured catchy angelic imagery on the monitors to create a serene mood to a peaceful song. Another new offering 'Nature's Law' that was doused in mancunian influences from the Smith's to the haunted cries of Ian Brown; implying that the doomsayers may have a little longer to wait before they see the end of Embrace.

Everyone rose up in the encore for 'Ashes' that saw 10,500 people yelling with all their might, to visibly touch the humble Mr. McNamara. The floating and sombre 'The Good Will Out' put a lid on one of the most important and dare I say it: successful evenings in Embrace's intriguing career.


Catch Embrace on their Forest tour this spring;