Review of World At Your Feet Single by Embrace 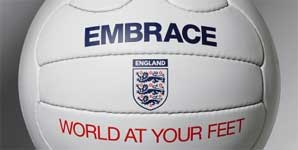 Following in the footsteps of the mighty New Order, Lightning Seeds, and er… Spice Girls, are Embrace, with their offering to inspire England's football team to win the World Cup. It's testament to the band's resurrected career that they've been selected for the job, but is it a piece of brilliance like a Gerrard goal, or a Beckham penalty miss?

Actually, it's not either of those. "World At Your Feet" is essentially what we've come to expect of the Yorkshire quintet, an uplifting indie anthem with Danny McNamara in ultra-optimistic mood. All good and well, but it isn't a 'football' song. There's nothing that invites the nation to join in, like the "In-ger-land" chant of "World In Motion", or the "It's coming home…" segment of "Three Lions". It's a decent effort though, and if Sven's men exit the tournament faster than Didier Drogba going to ground, the band can release "No Use Crying" from their latest album as well.