Emeli Sandé's debut album, 'Our Version Of Events', has beaten a chart record set by The Beatles by spending 63 weeks inside the UK Top 10. 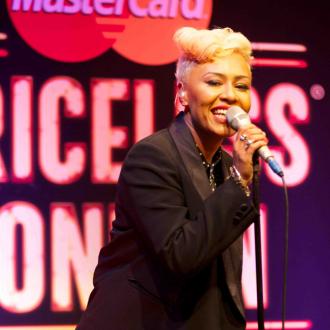 Emeli Sandé has beaten a UK chart record set by The Beatles.

The 26-year-old singer has set a new record for the longest time a debut album has spent inside the top ten of the UK album charts by reaching 63 weeks. She beats the legendary Liverpool group, whose debut, 'Please Please Me', spent 62 weeks in the top ten between 1963 and 1964.

Emeli told the Official Charts Company: ''I'm completely lost for words and this is something I could only have dreamed of.

''The Beatles are the greatest band of all time and their legacy lives on and continues to inspire all of us that make music.

''I'm so happy that so many people have connected with the stories and the songs on the record, this really is our version of events now.''

'Our Version of Events', currently stands at Number Five in the album chart and has sold 1.82 million copies in the UK alone.

Emeli has also been nominated for Best Original Song and Most Performed Work at the upcoming Ivor Novello Awards, as well as the prestigious 2013 Scottish Album of the Year Award.

However, the soulful singer almost gave up on a career in music altogether in order to become a doctor, as she felt it offered more job security.

She recently said: ''I had these dreams, but what was more important to me was to feel that I had safety and security in my life. That meant not thinking about being a singer and focusing on studying to be a doctor.''