John Krasinski announces himself and Emily Blunt "are so incredibly happy to welcome our daughter Hazel into the world today," after their first child was born on Sunday (Feb 16th). 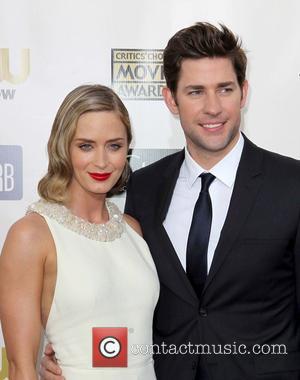 'The Office' actor, Krasinski, announced the news himself on twitter, noting that the couple have decided to name their baby girl "Hazel."

"Wanted to let the news out directly," he posted. "Emily and I are so incredibly happy to welcome our daughter Hazel into the world today! Happy bday!"

The pair first met five years ago in 2008 and become engaged in August of the following year (09). They eventually tied the knot on 10th July 2010 in Como, Italy.

The following December the 30 year-old Brit threw a star-studded baby shower at her Los Angeles, California home on the 14th, Blunt's pals Amy Adams, Jennifer Aniston and her fiancé Justin Theroux, and Kristen Bell were spotted arriving at the bash.

"It was a very casual shower," a source told People at the time. "Emily seems very excited about the baby and looks great. She opened gifts of baby clothes and plush toys in front of her guests as they enjoyed cookies and chocolate. Everyone was oohing and ahhing."

Even while she was far into her pregnancy, Emily did not stop working and continued to film the upcoming big-screen musical 'Into the Woods' in the U.K.

"Emily's so ready to have the baby!" a source told Us Weekly in December. "It's been difficult, with her traveling and them having to be apart."

Well now they can both relax, congratulations to the first-time parents. Blunt and Krasinski have called their daughter Hazel