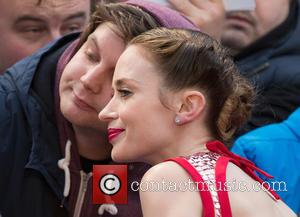 The British actress, who is married to U.S comic John Krasinski, was sworn in as an American in August (15).

The matter later became headline news after Emily made a gag about her new status during a TV appearance.

"I became an American citizen recently," said Emily on U.S. talk show Jimmy Kimmel Live! "And that night, we watched the Republican debate and I thought, 'This was a terrible mistake. What have I done?'"

Emily subsequently found herself the target of heavy criticism, and subsequently admitted, "I was sort of astonished by the outrage, because it was meant completely as an innocuous joke. So I think I was more just quite taken aback."

She has now opened up about her reasons for becoming a U.S. citizen.

Emily reveals it was mostly for tax purposes as she did not want to give up being a Brit.

"It's mainly for tax reasons," she tells U.K. magazine Style. "I didn't want to renounce my Queen. You have to learn all about the constitution. You can't be a habitual drunk, you can't be on a guerrilla squad and you can't be a prostitute..."

She jokingly adds, "Which is a shame!"

Emily also admits she felt a little downhearted during the ceremony.

"I felt quite sad, actually. Having to be sworn into a country that wasn't mine. I know at the core of it, I haven't given up anything, but it was sort of bittersweet."