'The Office' actor wanted to introduce the world to their daughter, Hazel, before anyone else go the chance: "Pics of kids should only come direct from parents." 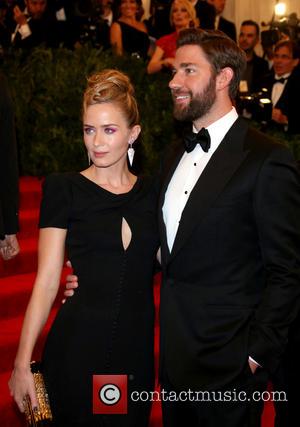 John Kraskinski and Emily Blunt are parents to a very cute baby daughter.

'The Office' actor decided to introduce the world to the acting couple's newborn on Tuesday (May 13th) by posting a photo of her on Twitter.

"Pics of kids should only come direct from parents," he tweeted. "So I'm thrilled to introduce you guys to Hazel!!!"

Krasinski and Blunt's adorable baby girl, who is nearly three months old, stares into the camera while showing off a pair of enthralling blue eyes as she lays down with one arm above her head.

The British actress, who first announced she is pregnant in September last year (2013), gave birth to Hazel in February and this is the first time the general public have had the chance to see their daughter.

At the time Krasinski also took to social media to announce the arrival of Hazel, and on Feb 16th he posted, "Wanted to let the news out directly. Emily and I are so incredibly happy to welcome our daughter Hazel into the world today! Happy bday."

The pair, who first met five years ago in 2008 and become engaged in August of the following year (09), eventually tied the knot on 10th July 2010 in Como, Italy and this is their first child together.

As a new addition has come into their family, the couple recently purchased a Hollywood Hills mansion for $2.75 million, which includes four bedrooms, three bathrooms and is located on a double 37-acre lot with a stunning pool.

Adding, ''The walled estate is situated on two lots, offering plenty of privacy for the new parents. The house also has a beautiful swimming pool surrounded by a stone patio.''

Pics of kids should only come direct from parents. So I'm thrilled to introduce you guys to Hazel!!! rel="nofollow" #NoKidsPolicy rel="nofollow" pic.twitter.com/qVvUTRdllP