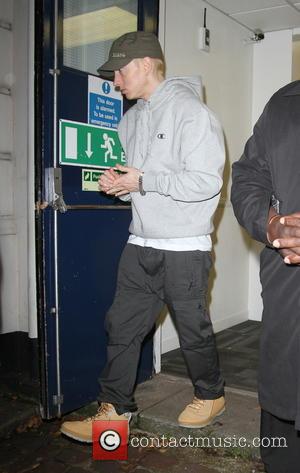 Picture: Eminem - Eminem leaving BBC Maida Vale Studios after performing a secret gig. The rap superstar did not want to be photographed and tried to...

The Without Me hitmaker, who has always spoken highly of Shakur and his influence on hip-hop, once wrote to Shakur's mother Afeni about her son, who was killed in 1996.

In the note, Eminem, real name Marshall Mathers III, writes, "You have no idea how much your son and his music has inspired, not the 'hip-hop' world, but, speaking for myself, has inspired my whole career. He was, and still is, the true definition of a 'soldier'. When I was feeling at my worst (before fame, before Dre) I knew I could put that 'Tupac' tape in, and suddenly, things weren't so bad. He gave me the courage to stand up and say 'F**k the world!' 'This is who I am! And if you don't like, go f**k yourself!' Thank you for giving us his spirit, and yours! God Bless you! Love, Marshall"

The letter is accompanied by a drawing of Shakur with the caption, "To Afeni - your friend 4-ever (sic)! Marshall". It is currently on display in the Tupac Amaru Shakur Center for the Arts in Georgia.