Bad Moms is an American comedy film that stars Mila Kunis as the main protagonist Amy Mitchell who appears to lead the perfect life, she has a good career, over - achieving kids and a lovely home. However all is not as it seems and Amy is at the point of breaking. She is over-worked and finds herself running late to all her appointments. In her quest to free herself from this rut, she joins forces with two other overworked mums to liberate themselves from their daily responsibilities and start living again.

Based on ancient mythology, this Christmas horror movie has a gleefully nasty attitude that makes it entertaining even if it isn't properly frightening. This is mainly because the marauding monsters remain sketchy at best, never developing anything more than a superficial sense of dread. But the ace cast is terrific at engaging the audience,and the filmmakers keep viewers gripped as they play merrily with cliches from both horror and holiday movies.

It opens on a recognisably stressed-out Christmas season, as Tom and Sarah (Adam Scott and Toni Collette) feel their relationship straining under the pressure of work and holiday plans. They and their teen kids Beth and Max (Stefania LaVie Owen and Emjay Anthony) are dreading the arrival of their Aunt Linda and Uncle Howard (Allison Tolman and David Koechner) and their boorish kids. Then the drunken Aunt Dorothy (Conchata Ferrell) turns up unannounced. Tom's German mother (Krista Stadler) watches all of this with a silent, knowing dread. But the real threat is outside the house, as a vicious ice storm settles in, knocking out the power and unleashing a ferocious Anti-Santa and his evil gang of elves and killer toys.

The film is strikingly well shot and edited, as director Michael Dougherty orchestrates the comedy, drama and action to focus on the gifted actors. While the design and in-camera effects are clever, much of the digital effects work is ropey, giving the movie a cartoonish sheen. And the monsters themselves are eerily expressionless: ghoulish puppets with immobile faces. So they're extremely creepy, but not particularly menacing, because they have no personalities at all. Thankfully, Scott, Collette, Koechner and Tolman are experts at sliding effortlessly between comedy, drama and terror. And young Anthony gives the film a blast of resonance as Max, a boy still young enough to believe in Santa who thinks he has brought all of this violence down on his family. 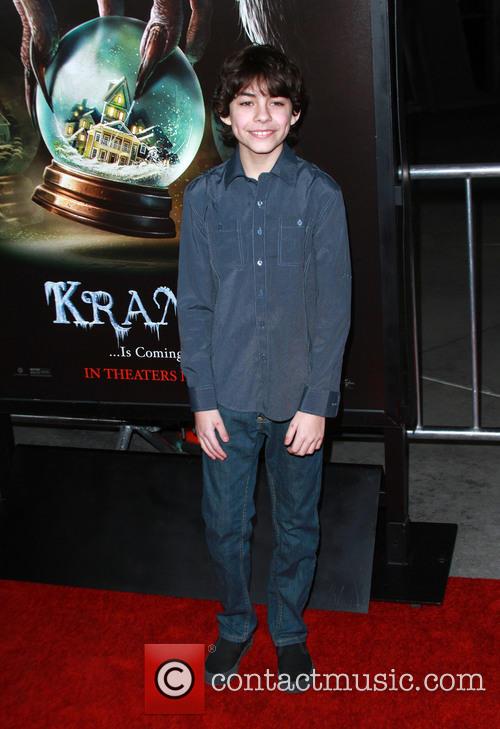 For a lot of kids, the Christmas holidays is their favourite time of year, all the family is together, Christmas day usually brings gifts from Santa and the thought of time off school all amount to smiles in most homes. Max's family is one of those who've got together for the holidays and you'd think that he'd be a happy boy, but when he has a change of heart about the Christmas period, he accidentally evokes the wrath of an ancient force who punishes ungrateful people over the Christmas period - the complete opposite to that of the children loving, gift giving, Saint Nicholas.

Max and his family must team together to find a way to survive the Christmas period without Krampus and his little helpers destroying their entire family.