Emma Roberts has a 'complex about being pale'

Emma Roberts has confessed she has had a ''complex about being pale'' since she was a little girl and resorted to wearing too much fake tan in order to make herself feel better. 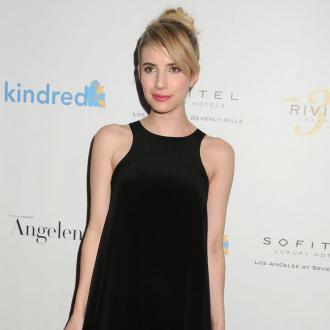 Emma Roberts has a ''complex about being pale''.

The 24-year-old actress has revealed she has worried about her complexion since she was a little girl and often resorted to wearing too much fake tan in order to make herself feel better.

The brunette beauty - who stars in American Eagle's new #AerieREAL campaign which only uses un-retouched images of models sporting their lingerie - said: ''I definitely have a complex about being pale because I've been made fun of my whole life, so I was nervous about that.

''When I was a kid, everyone would be like, 'Your legs are so pale! I can't believe you're wearing a dress!' And I would get so embarrassed.

''I would get spray tans, and I look back at those photos now, and I just think: Oh my goodness, you're orange. I would tell my younger self to stop spray-tanning so much. Just own it.''

Emma added she couldn't wait to participate in the award-winning campaign - which features models of all shapes and sizes - because she has been made to feel insecure by over-Photoshopped adverts.

She explained: ''I just loved the messaging behind it. I thought the whole idea was so inspiring. Yes, I'm an actress, but I'm also a real girl. Seeing [Photoshopped] ads, you get kind of bummed. You're like, 'Ugh, do these people really look like that?'

''I feel like whenever girls see the word 'real,' they automatically think 'flaw'. I hope that with this campaign they start seeing 'real' as beautiful and just who you are, inside and out.''

But while the 'Scream Queens' star was keen to show off her natural beauty in the shoot, she admitted she still tried to get into the best shape possible.

She told PEOPLE: ''They gave me the date for the shoot, and it made me definitely work out more and be healthier and want to take care of myself more up until the shoot. And I think that change is gonna stick - it's been good for me.''