Emma Stone says she and real-life boyfriend Andrew Garfield had ''instant chemsitry'' when working on 'The Amazing Spider-Man'. 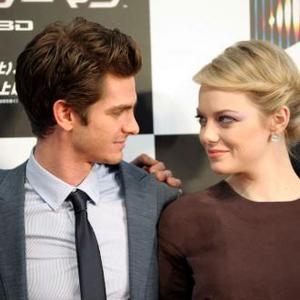 The couple began dating after meeting on the set of 'The Amazing Spider-Man' and the actress loved working closely with the actor on the superhero movie and hoped their close Bond is reflected in their characters.

Emma - who plays Gwen Stacy - said: ''It was really great to work with Andrew. We just had instant chemistry as soon as we were on set and I think it was great to be able to build that relationship.''

Emma has previously worked with hunky actors including Penn Badgley in 'Easy A' and Ryan Gosling in 'Crazy, Stupid, Love' and jokingly claimed she only agrees to appear in films with ''hot'' co-stars.

Speaking at the UK premiere of 'The Amazing Spider-Man' in London's Leicester Square this evening (18.06.12), she told BANG Showbiz: ''I only seem to work with hot men and it''s pretty great to get that contractually written.''

The 23-year-old beauty also admitted she much prefers the ''romance'' element to 'The Amazing Spider-Man' as she was more comfortable shooting those scenes than getting to grips with anything physical.

She said: ''The romance is my favourite part of filming because I don't do the action quite as well.''

Other stars in attendance at the premiere included Andrew, their co-star Rhys Ifans and his girlfriend Anna Friel, and the movie's director Marc Webb.