Emma Stone felt ''overwhelming'' pressure while filming 'The Amazing Spider-Man' because she was so eager to impress die-hard fans of the comic book series. 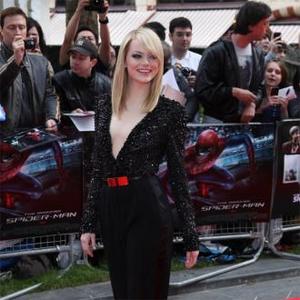 The 23-year-old actress - who began dating co-star Andrew Garfield (Peter Parker/Spider-Man) after meeting him on the set of the action movie - found shooting the film to be a ''big challenge'' because she was so eager to impress die-hard fans of the comic book series.

She told BANG Showbiz: ''The film was a big challenge because I wanted to please the comic book fans so there was pressure. It was very overwhelming that the 'Spider-Man' story is 50 years old so there was a lot of live up to but I hope we did a good job.''

Emma stars as ''super smart'' schoolgirl Gwen Stacy - who is Peter's love interest and helps him to try to stop Dr. Curt Connors/The Lizard (Rhys Ifans) wreaking havoc in New York - and director Marc Webb believes Andrew and the blonde beauty had some ''great banter'' while shooting the movie.

Speaking at the UK premiere of 'The Amazing Spider-Man' in London's Leicester Square last night (18.06.12), he explained: ''Andrew and Emma had this great banter on set and they were ideal to play intellectual characters. Gwen is super smart, I think she is maybe a bit smarter than Peter but don't tell Andrew I said that.''

Emma added: ''I really liked it that Gwen was an intellectual equal. Her whole story is really interesting.''

'The Amazing Spider-Man' is released on June 28.