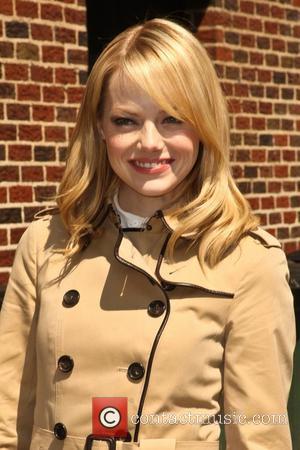 Emma Stone has risen to become one of the most popular actresses in Hollywood over the past couple of years, thanks to solid performances in the likes of 'The Help', 'Easy A' and 'Crazy Stupid Love', though it appears acting wasn't her first love.
During an interview with Ann Curry - whose own career is currently up in the air - Stone admitted, "I would have loved to be a journalist.I realize now as I get older I really would love to be an editor. I think that maybe I would be better at editing than actually writing the stories". Though editing copy would have been her favored line of work, it's likely that the fame and fortune she's likely to receive for her role as Gwen Stacy in 'The Amazing Spider-Man' may be a little more glamorous. As well as playing the love interest of Spider-Man in Marc Webb's new movie, Stone managed to bag herself the superhero himself, kind of. The actress struck up a relationship with Andrew Garfield while shooting the blockbuster movie, and the pair remain an item today. If Stone's acting career was to crumble, at least she has editing to fall back on - or perhaps cooking? The actress revealed that she did plenty of baking during the 'Spider-Man' shoot, saying, "I think the control factor was very therapeutic. (There's a) scientific element to baking".
'The Amazing Spider-Man', also starring Rhys Ifans, Martin Sheen and Denis Leary, hits cinemas worldwide on July 3, 2012.