Actress Emma Thompson Joined Greenpeace Activists In London On Wednesday (02sep15) To Help Install An Enormous Fake Polar Bear Outside The Headquarters Of Oil Giant Shell To Protest Against Drilling In The Arctic. 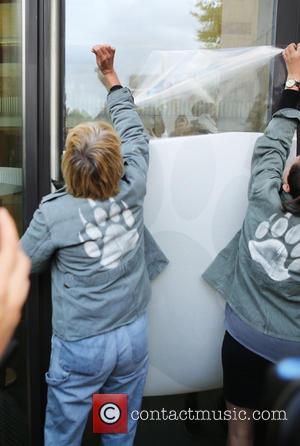 The Sense and Sensibility star joined more than 60 demonstrators to haul the animatronic animal, named Aurora, into place in the early hours so it could 'roar' periodically throughout the morning.

She even read out a specially-written poem she penned for the occasion, and told British newspaper The Independent, "Make no mistake about it, we're next. That's why I've come to their HQ. I'm here to say no. I'm here to say this has to end. I'm one of millions of people demanding that this company pulls out of the Arctic, and this huge polar bear is roaring with our voices."

Greenpeace wants Shell to end its drilling operations in the Arctic, claiming the activity puts the region at risk of an oil spill.