Emma Thompson claimed she is ''grateful'' to be going through the menopause because her hot flashes kept her warm at he National Board Of Review Awards Gala in New York last night (07.01.14). 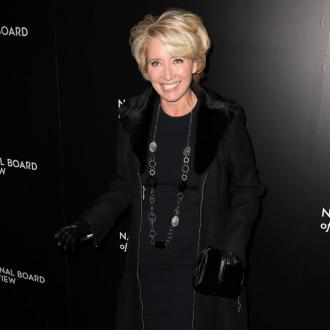 Emma Thompson felt ''grateful'' for the first time to be going through the menopause in New York City.

The 54-year-old actress admitted she was relieved to be experiencing hot flashes, as they were the only thing keeping her warm as she stepped out in Arctic conditions to attend The National Board Of Review Awards Gala last night (07.01.14), where she was presented with the Best Actress award for her role in 'Saving Mr. Banks.'

While accepting her accolade, the British star, who walked the red carpet in her black coat and kept her black leather gloves on, said: ''It's such a cold night and it's the only time I've actively been grateful for menopause.''

She added: ''I've been entirely comfortable.''

The two-time Oscar-winner also joked that she was thrilled to win the prestigious award after enduring months of ''no sex'' with her British actor husband, Grey Wise, due to the physical transformation she underwent for the role.

She said: ''It's been an extraordinary year for women's roles. I can't think what gave me the edge. It must have been the perm, which was a great sacrifice. It meant no sex for months on end.''