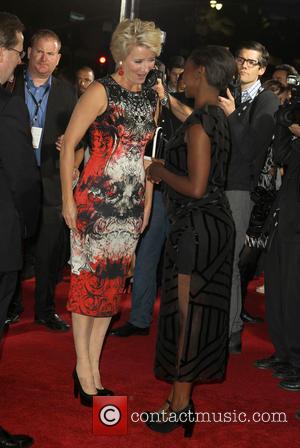 Emma Thompson showed off her singing skills by performing several tracks from Mary Poppins at a special Los Angeles lunch celebrating the launch of her new film Saving Mr. Banks.

The British actress plays author P.L. Travers, who wrote the original books about the magical British nanny, in the new movie, which focuses on Walt Disney's campaign to land the rights to the tale so he could adapt it for the big screen.

Thompson paid tribute to the beloved 1964 movie musical by performing a number of songs from its soundtrack, including A Spoonful of Sugar, in front of a glitzy crowd at the The Four Seasons restaurant on Tuesday (12Nov13).

She told reporters she relished playing the highly-strung Travers, adding: "We're all so b**ody well brought up. There is something authentic about her irritability, which I loved."