Emma Watson poses as her 'Bling Ring' character in the latest issue of GQ magazine. 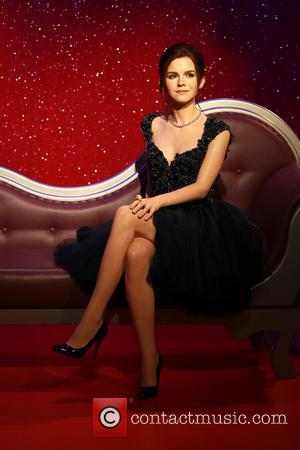 Emma Watson appears in arguably her most provocative photo-shoot yet, in the latest issue of Britain's GQ magazine. The 22-year-old - who stars in Sofia Coppola's The Bling Ring - wears a revealing cut-out dress for the cover image, similar to that worn by Julia Roberts in her classic 1990 movie Pretty Woman.

Dressed as her character Nikki in The Bling Ring, Watson pulls down the dress even further to reveal a tattoo on her hip. She also reveals ink on her left wrist and clutches an iced coffee as she stares down the camera lens. Watson - still best known for her turn as Hermione Granger in the Harry Potter movies - plays a young L.A. thief in the new movie, which sparked plenty of buzz at film festivals. "When I read the script and I realised that essentially it was a meditation on fame and what it's become to our society, I had to do it," she said in the accompanying interview with GQ, adding, "The character is everything that I felt strongly against - she's superficial, materialistic, vain, amoral. She's all of these things and I realised that I hated her. How do you play someone you hate? But I found it really interesting and it gave me a whole new insight into what my job or my role as an actress could be."

The movie is based on the true story of the 'Bling Ring' or 'The Hollywood Hills Burglar Bunch', who were finally arrested in 2009 after a string of break-ins at the homes of famous including Orlando Bloom and Paris Hilton. The gang stole expensive jewellery and clothes while the celebrities were out of town, or attending events in Los Angeles.

The full interview with Emma Watson appears in the May issue of Britain's GQ magazine, out on Thursday (April 4, 2013).