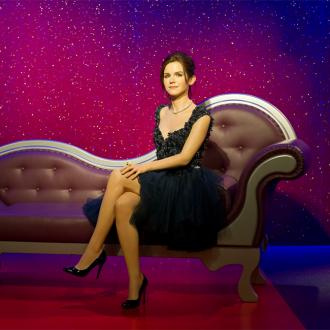 Emma Watson has become the ''English rose'' Madame Tussauds after her wax figure was unveiled on Tuesday (26.03.13).

The 'Harry Potter' star has been immortalised in wax at the world famous attraction in London and is joining a host of British screen icons such as Dame Helen Mirren and Kate Winslet at the attraction.

Madame Tussauds spokeswoman Nicole Fenner is thrilled the 22-year-old actress is now part of the exhibit, saying: ''Emma is the perfect addition and we're very lucky to add her to our A-list line up. She's a true English rose known and loved by millions of film and fashion fans around the world. ''She will feel right at home among a host of other glamorous personalities and we know she will be a huge hit with all our guests!''

Emma's likeness is dressed in the midnight blue backless cocktail gown embroidered with beads and crystals which she wore at a Lancome red carpet event in Hong Kong in December 2011. Lebanese fashion designer Elie Saab created the outfit.

The figure is positioned so it is sat chaise longue to allow fans to sit next to her and take their photo with Emma.

Senior sculptor Alex Carlisle was responsible for creating Emma's figure and is delighted with the model has turned out.

Alex said: ''The real challenge is getting that sparkle and likeness. It's a lovely dress but it shows off quite a lot of her body, which meant we had to get it very accurate.

''I think we captured that sparkle she has. She's very attractive and I really enjoyed sculpting her.''

Each wax figure takes approx four months to make and costs around £150,000.

Due to 'The Perks of Being a Wallflower' star's busy schedule, she was unable to sit for the model but Madame Tussauds gathered a huge amount of reference materials including photography and footage, and based on these resources the sculptors were able to make accurate measurements for the figure.