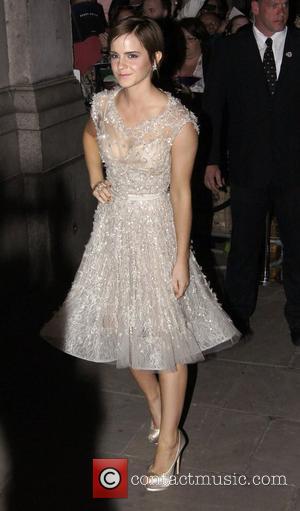 Emma Watson and her Harry Potter co-stars partied at an exclusive farewell bash following the 'Deathly Hallows: Part 2' premiere in London on Thursday (7th July 2011). Watson was joined by Rupert Grint, Tom Felton and Alan Rickman at the Old Billingsgate Market venue, but star Daniel Radcliffe was a no-show, according to the UK's Metro newspaper.
Despite her tears at the premiere, the actress threw herself into the party spirit and wowed photographers with a knee-length Elie Saab dress. Emma Roberts also attended the event with her rumoured beau Chord Overstreet, donning a sleek black Max Mara creation. British broadcaster Jonathan Ross was pictured with his wife Jane Goldman, while Potter stars Helena Bonham Carter, Bonnie Wright and Matthew Lewis were also spotted enjoying the event. Despite his surprise appearance at the Potter premiere in London's Trafalgar Square, Radcliffe was a no-show at the party but is rumoured to have flown back to New York where he is starring in the Broadway play 'How To Succeed in Business Without Really Trying'.
Emma Watson and her Potter co-stars were met by thousands of screaming fans for the premiere of the 'Deathly Hallows: Part 2', some of whom had been camping for two days to catch a glimpse of the stars.