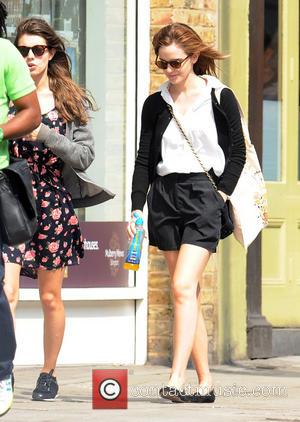 Picture: Emma Watson - Emma Watson takes advantage of the spring sunshine in the U.K. and shows off her legs in black shorts as she and...

The woman portrayed by Emma Watson in real-life crime drama The Bling Ring has become a first-time mum.

Alexis Neiers served four weeks behind bars for her role in the so-called 'Bling Ring' gang, which broke into the homes of stars like Paris Hilton and Orlando Bloom in 2008 and 2009 and snatched more than $3 million (Gbp1.9 million) worth of goods.

But now the former Pretty Wild reality Tv star, who Watson portrays in Sofia Coppola's upcoming movie about the case, has changed her life around after giving birth to her first child with husband Evan Haines last week (begs22Apr13).

In a post on her Twitter.com page, the 21 year old writes, "Happy to say that our baby girl was born on Wednesday. We are both happy and healthy! I feel like I have not slept for days but I am sooooo blissed oouuuttt (sic)."

The couple has named the baby girl Harper.