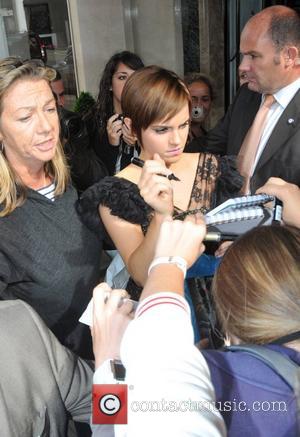 Emma Watson wowed fans at the final Harry Potter photo call on Wednesday (6th June 2011), when she posed for photographers in a sleek black Rafael Lopez dress, reports the UK's Daily Mail. Watson joined the rest of the 'Deathly Hallows' ahead of tonight's movie premiere.
Sporting her signature 'pixie' crop hair-style, the 21-year-old actress and model sent fans into frenzy after leaving the St Pancras Hotel to pose for pictures and sign autographs. Watson appeared visibly shocked as she was mobbed by eager fans desperate to catch a glimpse of the young star. Despite the hectic crowds, she signed a number of posters before being whisked away in a private car to join her co-stars for the official photo call. The actress was greeted by Rupert Grint, but Daniel Radcliffe was absent from the event due to his commitments to the Broadway production of 'How To Succeed In Business Without Really Trying". 23-year-old actor Tom Felton, who plays Draco Malfoy, was also present for the photo call.
Emma Watson and the Harry Potter cast will attend tonight's highly-anticipated premiere for 'The Deathly Hallows: Part 2', in London's Leicester Square. Fans of the movie have reportedly been camping out in the rain to catch a glimpse of the stars.