Emma Watson: This is the End script was 'crazy'

Emma Watson has revealed she thought the plot for 'This is the End' sounded ''crazy'' when she first heard about it. 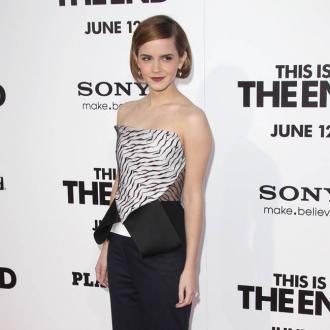 Emma Watson thought 'This is the End' sounded ''crazy''.

The actress plays an exaggerated version of herself in the new apocalypse-themed comedy - which stars Seth Rogen and James Franco - and admits she was initially confused by the plot, but quickly realised it would be a fun film to make.

She told website Flicks and Bits: ''I thought it sounded crazy. I remember trying to get my head around it on the phone to my agent who was like, 'So, it's Seth Rogen and Jonah Hill and James Franco and Danny McBride and all these other comedians. Seth Rogen and Evan Goldberg are making it, and all the actors are playing themselves, and it's going to be the end of the world... and they want you in the movie.'

''I'm like, 'What? Why? How?' I had so many questions. I just remember reading it and thinking it's hilarious, I thought it was the most crazy, absurd premise for a story I'd ever heard. I had to do it. I was taken aback. Why did they think of me? But then I read the script, and it was so funny. And I loved that they made the only two women in the story these really strong, bad ass, funny characters. We come off so well.''

'This is the End' centres on a huge celebrity-filled party at Franco's home as the end of the world looms, and other cameo appearances include pop star Rihanna and 'How I Met Your Mother' actor Jason Segel.