Emma Watson's waxwork was unveiled at Madame Tussauds this week, five years after Daniel Radcliffe's replica took its place at the London attraction. 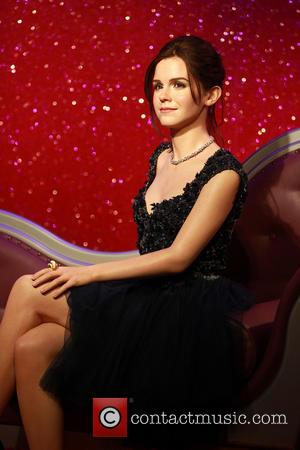 Emma Watson finally took her permanent place at Madame Tussauds this week, in waxwork form of course. A replica unveiled at the museum shows the 22-year-old Harry Potter actress sitting cross-legged on a chaise lounge, allowing fans to sit next to her and have their photos taken, reports the Express.

There was some speculation as to which outfit Watson would be wearing in her waxwork, and the designers opted for the subtle midnight blue Elie Saab dress that Watson wore to a red carpet event in Hong Kong back in 2011. Her brunette hair is pulled back into a beehive and the actress sports a cocktail ring on her left hand.

"Emma is the perfect addition and we're very lucky to add her to our A-list line-up," said Nicole Fenner of Madame Tussauds, "She's a true English rose, known and loved by millions of film and fashion fans around the world."

It's taken Madame Tussauds a fair while to recognise Watson in waxwork form. Her Harry Potter co-star Daniel Radcliffe had his unveiled five years ago. She joins the likes of Helen Mirren and Kate Winslet as some of Britain's biggest actresses celebrated at the London attraction. The 22-year-old gained worldwide fame as Hermione Granger in the Harry Potter films, though has gone on to appear in The Perks of Being A Wallflower. She will next star in Sofia Coppolla's The Bling Ring, though recently turned down high profile parts in Universal's Fifty Shades of Grey and Disney's Cinderella.

Emma Watson's waxworks is on display at Madame Tussauds from today (March 25, 2013).