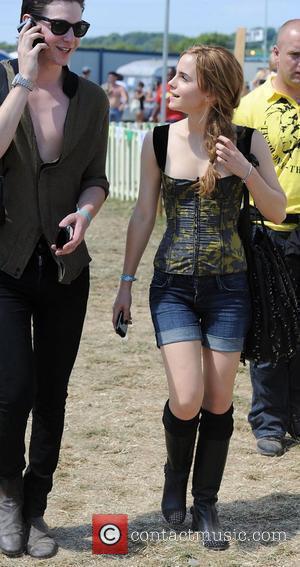 Emma Watson had to "grit her teeth" during the filming of the latest Harry Potter movie when she was called on to kiss both Rupert Grint and Daniel Radcliffe.
The next installment of the wizard franchise, Harry Potter And The Deathly Hallows: Part 1, is set to hit cinemas next month (Nov10) and the film features romantic scenes between Watson and both her co-stars.
Watson admits she felt uncomfortable filming the scenes because she struggled to separate Grint and Radcliffe from their onscreen roles.
She tells SFX magazine, "Getting into character to kiss Dan and Rupert was tough. Forgetting all of our history, and our relationship. Putting all that aside and being in character was pretty b**ody hard, it really was. That required a huge amount of professionalism. I really had to grit my teeth and be like, 'I am Hermione, this is Harry - stop thinking that it's Emma kissing Dan. It's not. It's all good.'"