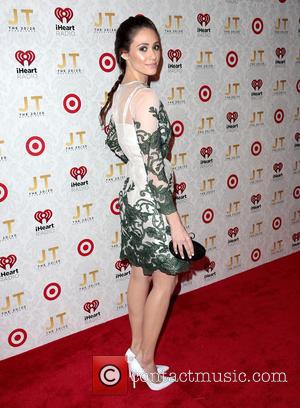 Stars including Emmy Rossum and Zachary Levi took to the stage in Beverly Hills, California on Wednesday night (20Mar13) to perform their favourite Broadway songs to raise money for charity.

The actors turned out at the Beverly Hilton Hotel for A Night at Sardi's, the Alzheimer's Association's annual celebrity musical revue and awards dinner which aims to fund research, support and care for those suffering from the devastating condition.

Chuck star Levi performed a duet of Frank Sinatra's The Lady Is A Tramp with dancer Keltie Colleen, while Rossum thrilled the crowd, which included stars Jason Bateman and Beth Behrs, with her rendition of Keep Young and Beautiful from Broadway hit 42nd Street.

Oscar-winning producer Brian Grazer was honoured at the event as he was presented with the Abe Burrows Entertainment Award for his commitment to the Alzheimer's Association.