Empire of the Sun - Walking on a Dream Album Review

Review of Empire of the Sun's album 'Walking On A Dream' released through Virgin Records. 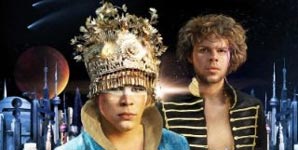 It's my favourite bit of High Fidelity, one of my favourite films; John Cusack's record shop manager turns up late for work to hear a new racket going out over his painfully elitist speakers. On asking who the perpetrators are, music retail fascist Jack Black desolately informs him it's the skateboarding dweebs who've been making a right nuisance of themselves outside. Black then buries his head in his hands, summing up his deflatory sense of unfulfilled schadenfreude, saying simply: 'It's really fu*kin' good'.

I can't begin to explain how much I wanted to unload on this record. I had practically half the review written - after all, it's much easier to send something down in flames - before I'd even delved beyond the over exposed title track. And I can reveal that after a number of listens and due consideration, I'm definitely having a Jack Black moment.

Luke Steele and Nick Littlemore are both in theory on sabbatical from The Sleepy Jackson and Pnau respectively, but the Walking On A Dream betrays their ambitions as extending way beyond the relative obscurity of their parent bands. On this evidence they may never go back. Not so much shaking hands with commerciality as grabbing it by the throat, their debut album is stuffed with less than oblique 80's references and by turns is indebted to the likes of Prince, Bowie and the poster boys of 'chill out', Air. Add to that sleeve art that looks like Adam Ant starring in the Never Ending Story and their galactic adventure agenda is there in all it's brazen nakedness.

As well as glorifying, rather than trying to obfuscate their influences, the duo unerringly head for the drawer marked 'Pop' and repeatedly poke you in the eye with it's bouncy, unbridled enthusiasm. The title track may for instance have been relentlessly over exposed as previously mentioned, but that still doesn't diminish it's essentialness. Hook laden blue eyed soul, the effect is Hall & Oates with a trippy flourish. It's a vibe which is impossible to really object to, even when Half Mast somehow manages to get away with an overblown keyboard riff that sounds like it's borrowed from the A-Team theme and the slightness of We Are The People is so Ibiza at sunset you can actually feel the shoreline breeze.

There is an occasional nod to the avant garde; Delta Bay possesses a false falsetto weirdness and a clutch of kitsch sixties harmonies and instrumental Country gently wafts like the best lift muzak....ever. Time and again though we return to the daddies of this micro movement, Steele treating us to his best take on the Thin White Duke during the closer Without You, while Swordfish Hotkiss Knight techno riffs on the Purple One with a pronounced sense of affectation/affection - I still can't make my mind up.

Were it not for the success of Oracular Spectacular I have no doubt that Walking On A Dream would've been laughed out of most record company boardrooms without so much of an is-that-really-zinc-cream-you're wearing. But the VanWyngarden phenomenon has temporarily worked on our inhibitions sufficiently that we no longer care about our cool lists. There's nothing here to rival Kids, or Electric Feel, but Empire of The Sun like the new romantics before them just need your head, heart and feet, and that's usually enough. It's really fu*kin' good.