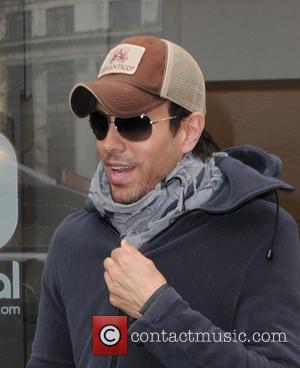 Enrique Iglesias' girlfriend Anna Kournikova gave the singer the go-ahead to cavort with semi-naked women in the video for his saucy new single.

The Spanish star is seen partying with girls in their underwear in the promo for new track I'm a Freak, and in one saucy scene, he is filmed stroking and slapping a female extra's buttocks.

However, Iglesias insists his long-term partner, tennis star/model Kournikova, loves the video and gave him the green light to dance with scantily-clad girls.

He tells Britain's Daily Mirror newspaper, "My girlfriend doesn't normally come to shoots, but she judges the video saying what she does and doesn't like. She loves this video and it's because she knows me and she knows if it's fun and it feels real, then it's right. She will be the first one to say, 'No, that feels forced'."

The Hero singer goes on to insist he did not set out to shock fans by filming a deliberately provocative promo, adding, "I think it's Ok to be sexual as long as it's honest. People know if it's honest or not. It really isn't about the 'wow' factor or trying to shock.

"There is a song where I sing 'Tonight I wanna f**k you' and it's so raw and opposite to a song like Hero.

"There is a lot of honesty to that and I think it comes down to how comfortable you feel singing that and I feel very comfortable singing it. It's one of my favourite songs."