III is actually the fourth album from this folk troupe from Philadelphia. Now officially a five-piece, the band has undergone a bit of a shake up and their sound hasn't escaped this. Stating that their aim was to 'record as little as possible', they have done just that. The result is a far cry from the dark, heavy layered sound of their previous album, II. 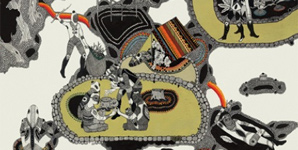