Ethan Hawke thinks most people have a 'childish view' of monogamy but insists he is committed to his marriage to Ryan Shawhughes. 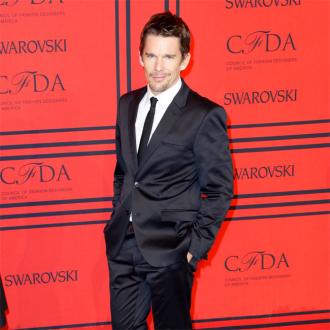 Ethan Hawke thinks most people have a ''childish view'' of monogamy.

The 43-year-old actor, who has two daughters, Clementine, five, and Indiana, three, with his wife Ryan Shawhughes, and two children, Maya, 15, and Levon, 11, with his ex-wife Uma Thurman, thinks there should be more to marriage than sexual fidelity but insists he is committed to his marriage.

The 'Getaway' star told the November issue of Mr. Porter magazine: ''My relationship with my present wife is thrilling to me and I'm committed to it. But neither she nor I know what shape the future will come in. Sexual fidelity can't be the whole thing you hang your relationship on. If you really love somebody you want them to grow, but you don't get to define how that happens. They do.''

He added: ''People have such a childish view of monogamy and fidelity. 'He's cheated so he's bad, she's cheated so she's bad,' as opposed to a recognition that our species is not monogamous. To act all indignant, that your world has been rocked because your lover wasn't faithful to you, is a little bit like acting rocked that your hair went grey. Human beings are sexual beings.''

But Ethan, who previously claimed he had no business marrying Uma when he was 27 because he was too immature, now insists he has no regrets even though they divorced in 1998 after six years together.

He said: ''We tried to be as optimistic as we could be: we all want to believe in love and the possibility of love. The older you get, the more you realize how powerful love is. You understand the right ways for emotion to lead your life and the dangerous ways. I don't regret marrying early.''