Ethan Hawke and his ex-wife Uma Thurman reunited for a skiing trip with their children after hanging out together at the Sundance Film Festival in Park City, Utah. 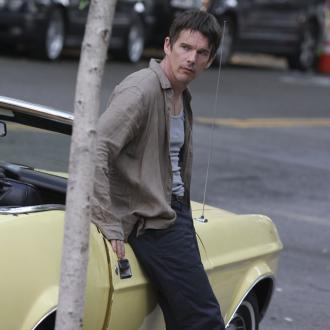 Ethan Hawke and Uma Thurman reunited for a skiing trip with their children.

The former couple, who split in 2003 after five years of marriage, were spotted enjoying some time on the slopes with their daughter Maya, 15, and son, Levon, 12, after they met up at the Sundance Film Festival in Park City, Utah.

An eyewitness said: ''They seemed very comfortable. They looked like a normal, happy family. No tension.''

A source told UsMagazine.com that the duo, both 43, also had lunch with their children at the Stein Eriksen Lodge.

Ethan and Uma have both moved on and had other children since their split.

The 'Boyhood' star has two daughters, Clementine, five, and Indiana, three, with his wife Ryan Hawke, whom he married in 2008.

Meanwhile, Uma has an 18-month-old daughter Rosalind with her on/off boyfriend Arpad Busson.

Ethan, who previously claimed he had no business marrying Uma when he was 27 because he was too immature, recently said he doesn't believe in monogamy but insisted he had no regrets about marrying the blonde beauty after meeting her on the set of 'Gattaca' in 1996.

He said: ''We tried to be as optimistic as we could be: we all want to believe in love and the possibility of love. The older you get, the more you realise how powerful love is. You understand the right ways for emotion to lead your life and the dangerous ways. I don't regret marrying early.''