Ethan Hawke and the cast of 'Boyhood' were only required to film for three or four days a year while making the coming of age film. 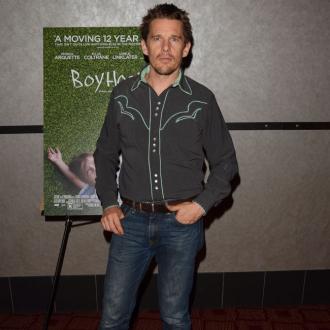 Ethan Hawke filmed for ''three or four'' days a year for 12 years for 'Boyhood'.

The 'Training Day' actor stars alongside Patricia Arquette as the father of lead character Mason (Ellar Coltrane) in the coming of age film, and he's opened up about the experience of filming for just a few days a year over 12 years.

The groundbreaking project - which was directed by Richard Linklater - was filmed over 12 years with the same cast and follows the story of Mason (Coltrane), who grows up on-screen and Hawke claims they were lucky to find a young actor who remained so committed.

Speaking on 'The View' he explained: ''You can't sign a contract for anything more than seven years so the whole thing was an act of faith. The kids could have quit at any time.''

Quizzed on why they didn't just use prosthetics to show the ageing rather than film over such a long period of time, he added: ''Because it wouldn't be authentic. The movie is striving to say something true about growing up and families.

''He's [Coltrane] a beautiful young actor and a really special person. The truth is we were very lucky, the whole thing would probably have fallen apart in year three or four if we'd picked the wrong kid.''