Ethan Hawke is pleased he didn't get the role of Jack Dawson - eventually played by Leonardo Dicaprio - because of how his life changed. 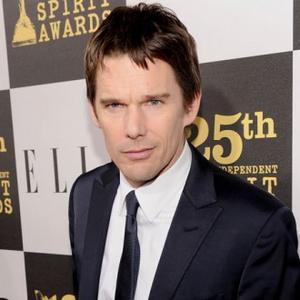 Ethan Hawke is "glad" he didn't get Leonardo Dicaprio's 'Titanic' role after he auditioned for the part in 1995.

The 'Training Day' actor revealed that after the release of the phenomenally successful film he saw Leonardo and saw how the star's life changed, making him glad he didn't play tragic Jack Dawson.

He said: "I sat there watching him and it was like watching a Beatle. The closest thing I've ever come to that frenzy. All the girls wanted to f**k him and all the guys wanted to fight him. I went to myself, 'Wow man, I'm glad I didn't get that part.'"

However, the 39-year-old star did admit to some feelings of envy for the 'Beach' star, thinking Leonardo would never have to worry about his career again.

He told the Telegraph online: "But you know, secretly, I couldn't help thinking that if I had got it maybe I could have lived exactly the life I wanted to. That I would never have had to worry about my career. Damn DiCaprio!"