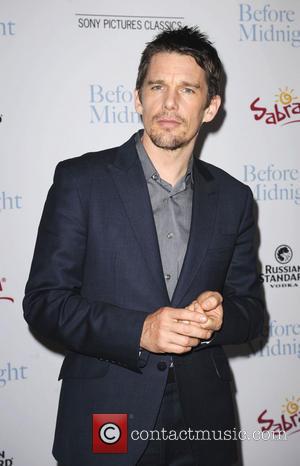 No, Getaway isn't the title of a new idyllic holiday movie where beach-bodies lounge under palm trees to ukulele music - it's the name of new action-packed crime thriller from joint directors, Courtney Solomon and Yaron Levy.

Perpetually goatee'd Ethan Hawke (Before Sunrise, The Purge) plays Brent Magna, a former racing driver whose mad skills are exploited by a mysterious stranger, who has kidnapped Magna's wife Leanne (Rebecca Budig) who, as reiterated in the trailer repeatedly, is beautiful. Why has she been kidnapped? How on Earth can her kidnappers constantly see what Magna is up to? (We'd love to know what phone network he uses that doesn't cut out when he's in a tunnel, seriously).

Cue a film that gives the impression of a mix between Taken (2008) and Drive (2011) - a man must drive like crazy to save the woman he loves from the evil clutches of an omniscient antagonist with a generic European 'evil baddie' accent.

Not to mention the turn of events that lead diminutive Disney princess Selena Gomez (Spring Breakers), who plays a character only know as 'The Kid', to attempt a hijack of Magna's souped up hero-mobile only to be taken along for the ride. She turns out to be not just a cute street criminal, but a feisty computer whiz who joins Magna on his quest to save his beautiful wife. Lucky, that.

With a heart-pounding plotline, the stakes are as high as the octane in this revenge-fuelled action thriller.

Released on 30th August in the US, rev your engines now.

Watch The Trailer For Getaway :