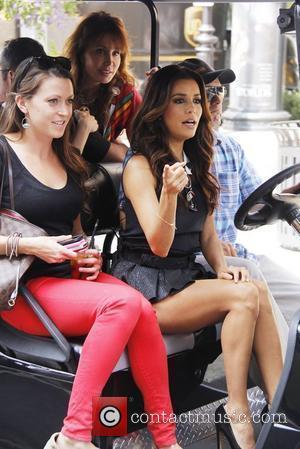 Eva Longoria admitted that she and new flame Mark Sanchez are indeed a couple last week, and yesterday put practice to her word as she and Sanchez were spotted leaving the Ritz Carlton in New York hand in hand.
This is the first time that the two have been spotted looking anything like a couple in public, and whilst the show of PDA was nothing major, it still looked as though the two are very much a couple. Longoria broke the news that the two are a couple on Thursday whilst she was being interviewed by Mario Lopez on Extra, telling him, "Mark and I are, you know, fine. We're happy just dating."
The Desperate Housewives star wasted no time at all when it came to finding a new piece of arm candy after she split from former boyfriend Eduardo Cruz, the 27-year-old brother of actress Penelope Cruz, in June this year. Longoria is of course no stranger to dating the younger man, as Sanchez, who is 25, is twelve years younger than the 37-year-old Ms Longoria. Her former husband, Tony Parker, was seven years younger than the actress. The two split after four years of marriage after it had emerged that he had been cheating on her.