Eva Longoria and her co-stars Tuc Watkins, Kevin Rahm and Vanessa Williams arranged for a burger van to show up on the last day of shooting on the next season of 'Desperate Housewives'. 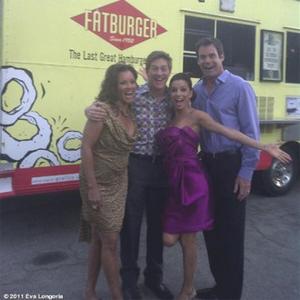 Eva Longoria and her co-stars treated the 'Desperate Housewives' crew to burgers on the last day of filming of the new season.

The actress - who plays Gabrielle Solis in the drama series - arranged for the Fatburger truck to visit the set and serve up a feast of calorific treats as a reward to the team for all their hard work.

Accompanied by a photo of her and three of her co-stars, Tuc Watkins, Kevin Rahm and Vanessa Williams, she wrote on her twitter page: "Last day of shooting on set for this season! So we got the Fatburger truck to come out and make burgers for the crew!"

Fatburger specialities include the 8oz Kingburger and the gut-busting 24oz Triple King - which is made up of three beef patties.

Eva, 36, isn't the only star who has treated crew members to an on-set treat.

Jessica Biel and Gerard Butler bought the 'Playing the Field' crew cupcakes from Cush's Grocery and Market while they were shooting in the town of Shreveport, Louisiana.

When filming in the same town, Katie Holmes treated the crew of 'Mad Money' to different treats every week.

A member of that crew previously said: "The first Friday was smoothies. Then we had ice cream, pizza, cupcakes, Coke floats and then snow cones."