Eva Longoria rounded off a week of birthday celebrations with her third party, held in Las Vegas on Friday (18.03.11), which saw her friends present her with a huge Pink cake. 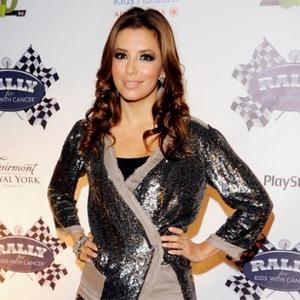 Eva Longoria rounded off a week of birthday celebrations with a huge Pink cake in Las Vegas.

The 'Desperate Housewives' star turned 36 on March 15 and held a number of parties to celebrate, including a 1920s-themed bash and a trip to Disneyland, but the week culminated with a trip to the US gambling capital on Friday (18.03.11).

Eva was accompanied by boyfriend Eduardo Cruz and friends as she ate at her Beso restaurant in the city before heading to Eve nightclub, where she was given the three-and-a-half-foot tall, five-tiered pink floral cake, which had 'Eve' written on it.

Eva appeared to have put her divorce from husband of three years Tony Parker - which was finalised in January - behind, telling USmagazine.com at the party: "Everything in my life is great!"

One onlooker revealed she and Eduardo were acting like a pair of "high school kids" at the bash.

They said: "They were very affectionate, with Eva occasionally rubbing her hand on his face and touching his chin as they kissed. It was like two high school kids who just fell madly in love because they were always so touchy-feely."

Despite having enjoyed a whole week of celebrations, Eva said her Las Vegas party was her favourite, adding: "I'm exhausted. This was like saving the best for last."